Abstract: In spite of the diverse major issues affecting the economy of Ghana over the years, the economy continues to experience a downward spiral in its economic growth. Taking into account three opining views regarding government spending and economic growth, this study sets to investigate the causal nexus fractious and economic growth in Ghana. We apply the autoregressive distributed lag (ARDL) bounds testing approach to co-integration and the vector error correction model (VECM)-Granger causality test to evaluate both long- and short-run parameters including the direction of causation with data spanning from 1980 and 2015.The empirical results show evidence of co-integration for the existence of a long-run relationship between the dependent and independent variables. The Granger causality tests, in addition, indicated causal independence between government spending and economic growth within the time framework of the study in the economy of Ghana. Government spending has a cause effect on economic growth in Ghana. However, government spending channeled into a more fractious use with the building of resilience and infrastructural development that are self-liquidating if encouraged will enhance economic activities in the short run and also propel growth in the long run in the Ghana.

The study of Puent et al. (2015) analyzed the possible presence of Granger causality between debt and growth in 16 OECD countries between the periods of 1980 to 2009. Applying the panel bootstrap Granger causality test to control for both the presence of cross-country heterogeneity and cross-sectional dependence, their results showed that government debt does not cause real GDP growth. Loizides et al. (2005) in their study, explored on the size of government measured as the share of total expenditure in GNP to find out whether or not granger causes the rate of economic growth. Adopting the bivariate error correction model within the Granger causality framework and including two variables being unemployment and inflation distinctly to generate a simple “trivariate” analysis, their results showed that government size granger causes economic growth in both the long- and short-run. Again, the results revealed that economic growth Granger causes the relative size of government.

In a bid to investigate the nature of the relationship between government expenditure and economic growth, Al-Faris, (2002) used a dynamic model adjusted to the Gulf Cooperation Council (GCC) countries’ data as methodology and found that national income is a prognostic factor which can increase government as hypothesized by Wagner. However, the empirical findings did not support Keynesian theory and hypothesis being that government spending causes growth. Following the expenditure income hypothesis debate in economics with a focus on Keynes and Wagner’s contradicting theories, Ansari et al. (1997) applied the Granger and Holmes-Hutton statistical procedures to test for the incomeexpenditure hypothesis for some African countries involving Ghana, Kenya, and South Africa. Their results revealed that the hypothesis of public expenditure causing national income is not sustained by the data for these African countries.
Bagdigen et al. (2004) taking into account the current developments in econometric techniques, investigates Wagner’s Law of a long-run relationship between public expenditure and GDP for the case of Turkey for the period between 19652000. The relationship is supposed public expenditure to be an outcome, not cause, of growth in GDP. Causality must run from GDP to public expenditure, not other ways around. Using the cointegration test and the Granger Causality test, their empirical analysis indicated the non-existence of causality in both directions; neither Wagner’s Law nor Keynes hypothesis was valid for the case of Turkey. The study of Islam, (2001) takes into account a re-examination of Wagner’s hypothesis of developing the government and the economy at large by using advanced econometric techniques such as cointegration and exogeneity tests which were not adopted in previous empirical studies. The result of their findings showed solid support for Wagner’s hypothesis for the USA.

In line with the above, Samudram, et al. (2009) examines the Keynesian opinion and the Wagner’s Law on the role of public expenditure on economic growth for Malaysia (1970–2004). Employing the Auto-Regression Distributed Lag (ARDL) model and the ‘bounds test’ (Pesaran et al, 2001) as methodology, their analysis results showed the existence of a long-run relationship between their variables. Furthermore, their findings revealed the long-run causality being bidirectional for GNP and expenditures on administration and health, which supports both Keynes view and Wagner’s Law considering the structural break in 1998.
Magazzino, (2012) acknowledged Wagner’s Law as the principal model of public spending in the history of public finance and assessed the empirical evidence of public spending and growth in the Italian economy for the period 1960–2008 at a disaggregated level by adopting the time series approach. The study revealed a cointegration relationship for three out of five items. Again, findings from the Granger causality tests showed confirmation of support of Wagner’s Law only for passive interests spending in the long-run, and for reliable labor income spending in the short-run.

Lastly, an insightful study by Chen, (1993) sets to investigate the causal relationship between defense spending and economic growth in mainland china was examined for the period between 1950 and 1991. The result showed that defense spending is not cointegrated with economic growth rate, indicating the nonexistence of long‐run equilibrium relationship between the two variables. The Granger causality tests, in addition, indicated causal independence among the two variables.

This study is an empirical investigation evaluating the causal relationship between economic growth, debt, current account balance and inflation. An appropriate econometric model, which supposedly established the relationship between variables of interest, are specified and used to aid us to practically demonstrate the effect of government spending on economic growth in Ghana. In line with the theoretical considerations, we specified the models as:

It is significant to examine the time series characteristics of the variables. This is for reasons of determining the order of integration due to the fact that the ARDL bounds testing approach to cointegration are applicable only in the presence of I(0) or I(1) variables, thus, being stationary/integrated at the level form or at first difference. That is, the assumption of bounds testing will disintegrate in the presence of I (2) variable (Fosu et al., 2006).

Figure 1 above indicates the trend of variables from 1980 to 2015 in their logarithm form. The vertical axes, in turn, show that the variables are measured in a different unit but converted to logarithm forms in a bid to bringing them to balance in the same base or unit.  The trends of the variables Gross Domestic Product, Debt profile, current account balance and inflation. The graphs, however, exhibit trends and structural breaks.  We conduct unit root tests on our variables of interest by utilizing both the NG-Perron and ZA tests at 1%, 5% and 10% levels of significance. The null hypothesis signifies a unit root problem exists, that is, β1 = β2 = β3 = 1 as against the alternative hypothesis also signifying the non-existence of unit root problem that is, β1 ≠ β2 ≠ β3 ≠ <1.

The bounds test approach to cointegration is ideal compared to other conventional cointegration tests due to the fact that it has several essential advantages over other conventional tests. The approach efficiently corrects for any possible endogeneity among the dependent variables. Another key advantage of the ARDL approach is that it helps to avoid the uncertainties generated by unit root pre-testing as it can be applied regardless of whether the series are I(0) or I(1). An even added or extra bonus of this approach is that unlike other conventional tests for cointegration, it can be applied to studies having a small sample size (Narayan, 2004). More so, both the short- and the long-run relationship can be simultaneously estimated. In this study we estimate the ARDL approach to cointegration using the following unrestricted error correction (UREC) regressions as follows: 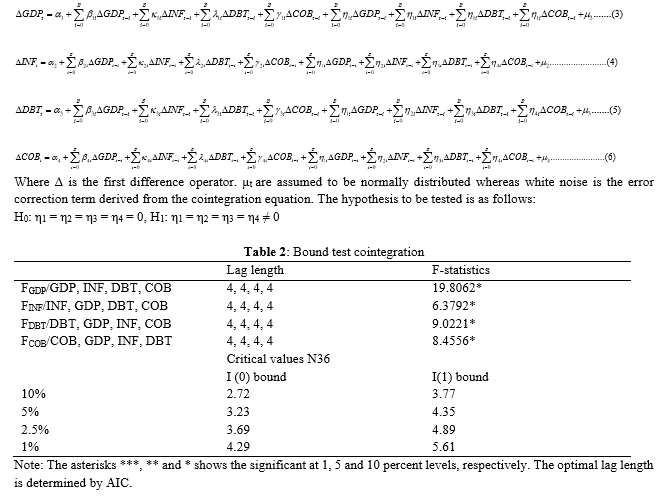 The calculated F-statistics for cointegration in addition to the diagnostic tests are conveyed in Table 2. In all the cases, the calculated F-statistics are greater than the 1 and 5 percent upper bound critical values provided by Pesaran et al. (2001). This shows that there is four cointegrating equation. Therefore, we can reject the null hypothesis of no cointegration on the basis that a long-run equilibrium relationship exists between GDP, inflation, debt and current account balance in Ghana. This is true with all the other variables considered as endogenous variables.

4.3 Estimation of the Long-run, Short-run and Error Correction Mechanism

Given the presence of cointegration, the short- and long-run parameters are estimated to determine the causal relationship between debt, inflation and current account balance and economic performance. The results of the coefficients are presented in Tables 3 and 4.

The causal relationship between the series is investigated by the application of the Granger procedure within the VECM. The existence of cointegration suggests a causal relationship in at least one direction. (Engle and Granger, 1987) signaled against using the Granger causality test in first difference through vector autoregression (VAR) method due to the possibility of misleading results in the presence of cointegration. The enclosure of an error-correction term aids in capturing the long-run relationship. The Granger causality test is improved by an error-correction term which is formulated as a bi-variate path order vector error-correction model (VECM) as follows:

This study examines the effect of government spending on economic growth for the period between 1980 and 2015 in the economy of Ghana. The empirical analysis, following the variant of Magazzino, C. (2012), shows evidence of cointegration for the existence of a long-run relationship between GDP, inflation, debt and current account balance in Ghana including all the other variables considered as endogenous variables.  However, the confirmation of this cointegrating vector does not inevitably imply the presence of a cause-effect relationship. This births the initiative to investigate the short and long-run parameters to enable us to determine the causal relationship between debt, inflation and current account balance and economic performance of Ghana.

The Granger causality test, in addition, reveals that in the long-run there exists causality among the variables. Adversely, in the short-run, it shows the existence a unidirectional causality from inflation to GDP, from current account balance to both debt and inflation indicating growth hypothesis and a bi-directional causality existing between GDP and current account balance and between GDP and debt indicating feedback effects in the economy of Ghana.
Our result supports the first of the three opining views of government spending and economic growth following the theories of Wagner (1883) and therefore, concludes that government spending in effect propels economic growth in the case of Ghana. To further enhance growth, the study recommends that public funds should be channeled into full use, a building of resilience and infrastructural development that are self-liquidating. Government spending should be directed largely to current productive economic activities, in order to invigorate activity in the economic sectors. Again the government should focus more on current investments in order to enhance economic growth in the long-run and propel economic activities in the short-run.

The authors of this study would like to express their sincere gratitude to the various reviewers for their invaluable remarks on the scholastic ideas of this calligraphy. Our intellectual debt which is evident through this study goes to all the professors and other prominent sources of stimulation, inspiration, and support.